Since early January not a day has gone by without headlines in print, broadcast, and social media that highlight the spread of the novel coronavirus that originated in Wuhan, China. With that level of daily attention, most of it carrying dire warnings that the virus will spread rapidly throughout the world, leaving many deaths in its wake, it is no surprise that Americans are worried.

We do not dispute that concern and preparedness are fully warranted in this case. As facts emerge about the Wuhan coronavirus, officially called 2019-nCoV, it is clear that it is spreading from China to many countries, that the virus can be transmitted by human-to-human contact, and that there have been fatalities. As of February 3, there were 11 confirmed cases in the U.S. with 82 tests pending. There are also 167 cases of people who were concerned they had contracted the virus but tested negative. Worldwide, again as of February 3, the virus has infected more than 17,000 people in 23 countries (most in China) and caused about 360 deaths.

Despite its rapid spread and severity, there are two things we want to explore about the new coronavirus. First, it is unclear if people in the U.S. truly understand what their own personal risk is. Recently, for example, we have heard people ask, “is it safe to eat in a Chinese restaurant?” Where should such a person go to get a reliable answer to this kind of basic question that is important in everyday life?

Second, the daily mass media output about the coronavirus may be obscuring health threats that are already much greater and about which people can take immediate preventive action. Yet such health threats receive almost no regular media attention, giving the public the misimpression that they are not important. Indeed, Critica Chief Medical Officer David Scales and his colleagues at Harvard and Yale Universities showed in a 2013 paper that in the setting of a pandemic, there is truly a crowding out of other important health news.

We will address both of these points in more detail in a moment. First, let’s review briefly what we currently know about this new virus and the risk it poses.

Scientists use a statistic called Ro (pronounced “R naught”) to characterize how infectious an illness is. An Ro of one means that an infected person generally will transmit the illness to just one other person. The novel coronavirus appears to have an Ro of between 3 and 5—every infected person can infect three to five other people.

To put that into perspective, Critica CEO and public health specialist Sara Gorman notes that measles has an Ro of 18. In order to prevent spreading the virus, the most important steps are frequent and thorough handwashing and covering one’s mouth and nose when coughing and sneezing. Surgical masks probably do not filter enough air to effectively prevent either transmission or acquisition. Americans are advised not to travel to China right now if possible. 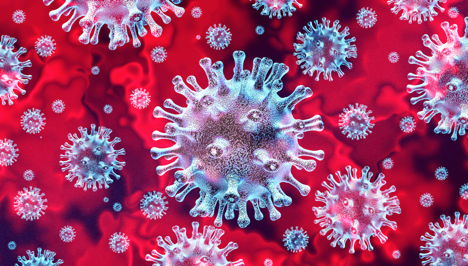 A Coronavirus like the ones that causes SARS and MERS, looks like a crown under high magnification (source: Shutterstock).

Most of the above information is readily available by reading the newspaper or going to the websites of the Centers for Disease Control and Prevention (CDC) and the World Health Organization (WHO). But how do we get answers to questions like the Chinese restaurant one?

CDC Does Not Prioritize Informing the Public

On January 21, the CDC issued a press release titled “First Travel-related Case of 2019 Novel Coronavirus Detected in United States”. It lists five things the CDC “has been proactively [doing to prepare] for the introduction of 2019-nCoV in the United States for weeks.” Each of the five bullet points gives important information for healthcare professionals and public health officials. Each demonstrates the CDC’s usual high level of scientific expertise and remarkable ability to rapidly identify and mitigate potential infectious disease health risks to people in the U.S. Included were things like developing a test to diagnose cases of infection by 2019-nCoV, alerting physicians what to look for in suspected cases, and initiating screening at airports of people entering the U.S. from countries where there are high rates of infection.

We were struck, however, by a bullet point that was absent from the press release: how is the CDC communicating the risk of getting infected to the American public? Surely the CDC understands that once a case inevitably arose in the U.S. that people would become worried, especially given the nearly unprecedented level of media attention given to the novel virus. Yet there was no mention of what public communication efforts the CDC was undertaking to ensure that we all have accurate information.

Inaccurate information predictably flooded social media. Everything from fake cures like saltwater, alcohol, and vinegar to conspiracy theories that the drug companies were provoking panic about the virus so they can make money selling a vaccine could be found on the internet. To their credit, Facebook, Twitter, and YouTube all announced steps to mitigate the flow of misinformation. Scientists have also, perhaps for the first time, initiated concerted efforts to counteract online misinformation with correct information in real time. Nevertheless, the CDC must have anticipated that incorrect information would find its way onto hundreds of internet platforms, further confusing the public. And we desperately need an esteemed agency like CDC to help us grasp what is known about the virus and how much of a threat it is believed by scientists to pose.

Just how risky 2019-nCoV is to the American public seems to be unclear. A January 27 article quoted a spokesperson from CDC saying that the virus posed a “low risk” in the U.S. A few days later, a report on CNBC was headlined “Ex-Obama health advisor: US needs to ‘stop panicking and being hysterical’ about coronavirus”.

Yet also during late January a headline in the Washington Post read “First U.S. case of potentially deadly Chinese coronavirus confirmed in Washington State”. One could also find an online post titled “New coronavirus may be much more contagious than initially thought”. Words like “deadly” and “much more contagious” do not seem to convey the same message as “stop panicking” and “low risk.”

We believe it is imperative that the CDC not only take the lead in uncovering the epidemiology and biology of 2019-nCoV but that it also takes the lead in communicating risk to its constituents. We also think this can be done without interfering with the work of state and local health departments. In this scenario, CDC would issue press releases and online communications on a regular basis that clearly lay out what is and isn’t known. These press releases should answer questions like whether wearing a mask is protective and whether you can catch the virus if someone coughs near you in a subway train or public bus. And what about the question about whether it is safe to eat in Chinese restaurants? The answer seems to be “yes”, although we could not find a CDC source for that information. We agree thoroughly with Saad B. Omer, director of the Yale Institute for Global Health, who wrote in the New York Times that “public health authorities should be candid with the public about the uncertainty that inevitably surrounds a new virus”. Our view is that the CDC should initiate an Office of Public Communication that imparts information aimed at people who aren’t epidemiologists or infectious disease experts, information that addresses the concerns and fears these non-experts are actually expressing.

Which brings us to our second point. While we once again assert that 2019-nCoV must be taken very seriously, as of this writing there are 11 confirmed cases in the U.S. and no deaths. Compare that to the fact that CDC estimates that this season (through January 25), at least 19 million people have contracted the flu and at least 10,000 have died. A vaccine is readily available that will at the very least substantially reduce both the risk of getting flu and the severity of illness if someone does get it, yet only about half of U.S. adults got the flu shot last year. As Joseph Guzman wrote in The Hill recently “…the flu rarely gets the sort of headlines an outbreak like the coronavirus does, despite killing more Americans each year than any other virus, and Americans do not seem to be particularly worried”.

This of course is part of a long-standing story about how risk is reported and perceived. Automobile crashes kill far more people than airline disasters, but only a plane crash makes the front page. Still, responsible media need to realize that what it highlights shapes the public’s perception of what is and isn’t an important health risk. Stories about the coronavirus are important news, but they can obscure other, even larger risks. Could we ask the media to pay at least a bit more attention to encouraging people to recognize how serious infection with the flu virus is, for instance, and the importance of getting the flu vaccine? More broadly, does the media have a responsibility to put epidemic risk in context? We think it does.

So, here are a few more things we know. You should wash your hands frequently and thoroughly. Wearing a surgical mask probably won’t prevent you from getting or spreading coronavirus. It is safe to eat in Chinese restaurants. Get the flu shot.

Let’s hope the CDC, World Health Organization (WHO), and media can get together and craft a useful flow of practical information that includes points like these. Critica will be happy to help.

View all posts by criticablogger